Fresh from the delights of Lego Designer, I spent this afternoon exploring the wonderful world of Lego and was not entirely happy with what I found.

Lego has an interesting history. According to a radio programme I heard a few years ago, Ole Kirk Christiansen (the Danish inventor of Lego) set out to design a toy that could be played with for long periods, indoors or out by both boys and girls.

That was in the 1930s. We are now in the now second decade of the 21st century and, goodness, how things have changed. 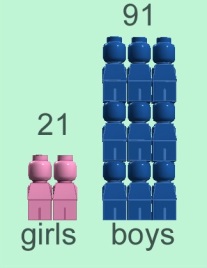 Take the world of Lego mini figures. According to my research, the seven general series of mini figures currently available consist of 112 figures of which 91 are male and 21 are female. Even theoretically gender-neutral figures such as “Classic Alien”, “Windup Robot” and (I kid you not) “Demolition Dummy” are male.

With the honourable exception of the Surgeon and the Zookeeper, the female characters are a collection of stereotypes that would make Jeremy Clarkson blush. They include “Cheerleader”, “Hula Girl”, “Kimono Girl” and “Viking Woman”.

It’s not just the figures, but each of them has a personal biography. The latest series includes a female “Grandma Visitor” (I think they mean Red Riding Hood) and a male “Computer Programmer”.

According to her biography “Little Red Riding Hood Sweet little Grandma Visitor is skipping through the woods to pay a call on her dear old granny. With her fine red hood and a basket full of tasty treats, she’s sure she won’t run into any wicked wolves…or …say, what was that noise over there behind that tree?”

Suddenly, she hears a familiar voice.

“Well, be careful. These woods are full of all sorts of dangerous characters – and I don’t just mean Gorilla Suit Guy. Why, only this morning Jungle Boy caught a glimpse of someone we believe to be Computer Programmer Girl – and you know what will happen if she catches up with you …”

“Yes. You could end up with a stimulating well-paid career in a cutting edge software house”.

2 thoughts on “Lego – an everyday story of mini folk”