My first school, All Saints’ (C of E) (Voluntary Controlled)  (Mixed) was in the middle of the Derbyshire Peak District. In the Peak District, geography is everything and the school, like most of the town, was built on the side of a hill. As a consequence,  not only did we have no playing field, but most of the outdoor space was at an angle of 45° (OK, I exaggerate, but not much).

As mixed infants, formal physical activity was patchy. Indoor activity had to fit into the space available, so once again we were at the mercy of geography: this time it was the internal geography of the school building. The school was built on a standard Victorian pattern of one large room, with a class at either end. The area between classes contained a piano and was used as a school hall. The Reception Class was partitioned off by a glazed folding screen which went the full height of the room. 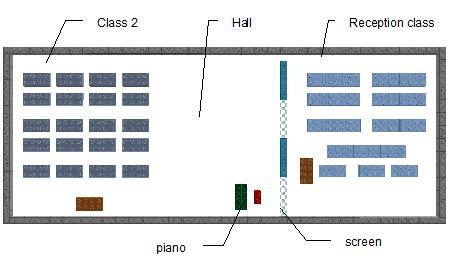 The Reception classroom could comfortably accommodate 25 children –  unfortunately there were 40 of us. So, full marks to Mrs Geeson who, on winter Monday afternoons, managed create enough space for English country dancing. I loved country dancing.

In dry weather, we had P.E. outside in the yard and did things with bean bags (the kind you throw, not the kind you sit on – they hadn’t been invented) and wooden hula hoops.

When we moved up into Mrs Hill’s class, we gained access to the hall space and were introduced to the glories of Music and Movement, a BBC Schools programme. In those days, you couldn’t record programmes to use later; you had to listen to them when they were broadcast. This meant that, for 30 minutes or so a week, hundreds (if not thousands) of children throughout the country were taking part in a single lesson under the direction of a single wireless announcer.

Music and Movement is an example of something very simple that worked.

“Now children, I want you to curl up very tightly on the floor and imagine that you’re an acorn.

“It’s stopped raining, children. The sun’s shining. Can you feel the sun shining? The acorns are starting to put out shoots”.