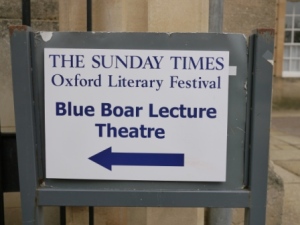 The Sunday Times Oxford Literary Festival is over for another year. What a contrast to 2012! Last year people were wandering round in tee-shirts and shorts and eating picnics in Christ Church Meadows – this year’s festival-goers had to contend with near-zero temperatures, rain, hail and even snow.

All the events I went to were excellent and I shall be following up on some of the themes (especially crying and big data) for several weeks, or even months.

The second strangest thing was the sudden decision of Viktor Mayer-Schönberger (Professor of Internet Governance and Regulation at Oxford University) to start pulling faces whilst I was taking his picture: most un-professorial. On the other hand, he thinks that we should place more emphasis on information and less on technology (yessssss!!!!) which makes him officially one of my favourite people. 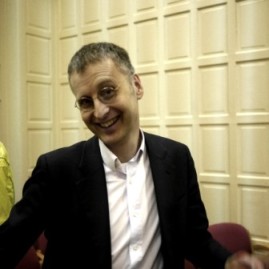 Strangest of all was the absence of the Festival Tent. In previous years the tent was a welcoming open door inviting you in, rather than having to go through Tom Gate and be pounced on by pathologically helpful college porters. (I eventually worked out that the best thing to do was walk quickly and mutter “it’s alright, I know where I’m going”).

More importantly, the Tent was a public space to wander round before, after or between events; a place to pick up the buzz; a place to browse books, catch fringe events like the Very Small Introduction talks or meet up with friends. This year was very much about going to an event and then leaving – the time between events being spent pottering around town or in local coffee shops. Without the Tent, the Festival had no heart. 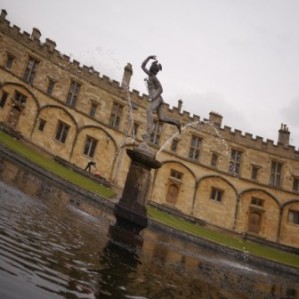 Festival-goers search in vain for the Festival Tent