One of the (many) benefits (and there are many) of not having to go to work every day is the freedom to follow a line of thought. At the moment, I’m following several lines of thought and acquiring more the whole time. It can be something as simple as “What on earth is a tax credit?“, “How do Hindus understand the elephant-headed god Ganesha?“, “Why are autumn leaves so amazing?” (today’s question) or a reflection on my personal experience of the works of William Shakespeare.

This last question was prompted by a visit, last Thursday, to the Oxford Playhouse to see The Tempest. And, yes, dear reader I have thought about the staging and the content and will review the one and pontificate on the other, but for the time being you will just have to settle for “it was very good”. This is because I have been temporarly diverted onto a different, but related, track. 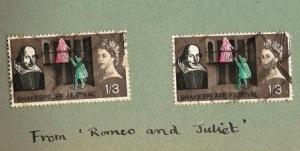 This was my first Tempest, unless you count the Helen Mirren version which I gave up on part way through. The key thing about Shakespeare, as one set of online notes put it, is that it was written to be performed – on stage, in a theatre. Perhaps that’s why I understood this production – why I “got” it.

I would say that my exposure to Shakespeare over the years has been pretty limited and would certainly not describe myself as a Shakespeare afficianado. Yes, I’ve seen various plays in college gardens and once saw Hamlet in a disused area of the local car plant, though the bit where the doomed Dane drove on to the stage in the new Mini may have been a product placement too far.

Then I thought about Shakespeare at school. This was triggered by the rememberance of a visit to the Playhouse in our ‘O’ Level year to see a very weird indeed student production of Julius Caesar. For some reason, they were all dressed up as aliens from another planet and no amount of explanation by the cast in the after-show Q&A convinced us that it was anything other than a really bad idea. We saw the same play later that year –  this time with the RSC at Stratford, who had opted for a more traditional toga-based approached.

This was the only time that we actually saw Shakespeare acted – otherwise, we just read the text and took notes which were recycled into essays. Not only did we not see live productions, we weren’t able to get a video or a DVD out of the library. And yet we ‘did’ Shakespeare. As well as JC, we definitely studied A Midsummer Night’s Dream; by a process of deduction, we must have studied MacBeth and Twelfth Night (I don’t really remember this, but I do know that we learnt “Make me a willow cabin at your gate …” and “Tomorrow and tomorrow and tomorrow …” by heart, so must have read the plays. This leaves a gap, which I think must be filled by either Romeo and Juliet or The Merchant of Venice.

Later, I would read Henry IV Part 2 and Othello for ‘A’ Level, but, again, without seeing a production.

Now memory’s a funny thing, because I then realised that I’d probably seen my first Shakespeare at the age of 7 or 8 as a result of my father’s involvement in the local am-dram group, The High Tor Players . Not exactly the RSC, but, according to detailed adjudication reports from the British Drama League, capable of putting on a more than competent production.

So, by the time I was 9 or 10, I’d certainly seen The Merchant of Venice, Twelfth Night and Macbeth. In fact, I sat through several rehearsals of of the ‘Scottish’ play, almost losing an eye on one occasion when someone got a bit carried away with a sword. I’m fairly sure that I remember seeing Romeo and Juliet with Marion Land, the formidable headmistress of my infant school, as the nurse, but I haven’t found any evidence to back that up. Like I said, memory’s a funny thing.

One of the things that’s tended to put me off Shakespeare is the idea that it’s a bit elitest. That’s certainly a view that it’s easy to slip in to, however unfairly, when the only Shakespeare on offer is either the Oxford college garden student variety, an expensive professional theatre production or a screen version featuring our very best actors.

So I’m grateful for this reminder of the little amateur drama groups in the little country towns who take on these monumental works and make them their own.

Yes, they’re doing it for themselves, but they’re also doing it for audiences who might never go to a professional theatre or who are just there to support a friend or relative in the cast. And, of course, they are also the ordinary people that Shakespeare wrote for. The notes were right – Shakespeare wrote plays that were meant to be performed by live actors in a real theatre.

The play’s the thing – don’t settle for anything less.