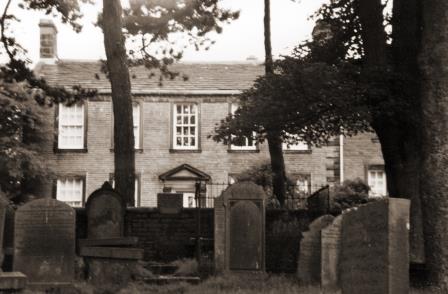 To Walk Invisible  was one of the BBC’s better Christmas 2016 offerings. There’s a particular challenge in reworking a familiar and already well-worked story – in this case the story of the Brontës – but this worked on every level. I’ve just watched it for the second time.

Like all great writing, it depended as much on what was left out as what was included. Although there were allusions to the Brontës childhood, which would have been known to most viewers, the focus was on the adult family and the circumstances that led to the writing and publication of some of the most remarkable works of fiction in the English language.

The settings were closely cropped. The action took place in and around the parsonage with occasional scenes in the Black Bull and Haworth village and, critically, on the moors – the exceptions being a trip to Manchester for surgery on Patrick Brontë’s eyes and Charlotte and Anne’s first trip to London to reveal themselves to their publisher. People do go away on visits, but they’re only really seen leaving and returning. This refusal to pep things up with a few well-appointed National Trust interiors helped the piece to remain focused – to be a drama rather than a documentary.

The drama was built around the awfulness of life at the parsonage as the family dealt with the daily nightmare of Branwell’s alcohol-fueled journey of self-destruction and the very real prospect of poverty for the three sisters.

It was this prospect of poverty, rather than any burning artistic need or proto-feminism that drove them to seek publication. Their father was elderly and not wealthy; they didn’t own the house they lived in; they weren’t married; they wouldn’t get any support from their brother and they were rubbish at being teachers and governesses. They decided to write because it was the only thing they were any good at that might make them a bit of money.

Everything about this production was good. The physical aspects of Branwell’s alcoholism; the upsets and tensions of a family living under pressure at close quarters; the claustrophobia of the parsonage – all  contrasted to great effect with the freedom and openness of the surrounding moorland – even the palette for the for the sisters’s dresses was made up of the muted greens and reddish-browns of the moors.

There was also an emphasis on the Brontës Yorkshireness. I was less sure about this. Although the sisters were given Yorkshire accents, contemporaries describe them as having Irish brogues or a mixture of the two. Some people have made a case for treating them as Irish writers – I think that’s going a bit far. First and foremost they were writers. Yes, they reflected their surroundings, but that would probably been true of wherever they lived – if they’d lived in Cornwall, they would have drawn on a Cornish environment. The personal factors – the family dynamics and the peculiar social circumstances of the well-educated daughters of a poor parson would have been the same. It’s interesting to speculate what the Brontës might have made of London or Chawton – imagine Mr Darcy in the hands of the creators of Heathcliffe or Mr Rochester.