Alan Bennett has made an unexpected, if welcome, contribution to my artistic uneducation – there’s a nice seam of art history to be mined in A Question of Attribution, his 1991 TV play about the Cambridge Spy Anthony Blunt.

In Untold Stories, he quotes the advice of someone who’s name I can’t remember, to spend an hour looking at a single picture. I did spend a good ten minutes in front of a Howard Hodgkin last Sunday, but only because the Western European galleries had been taken over by a very loud group of traditional singers and, with the best will in the world, the Islamic call to prayer doesn’t really go with early 17th century Dutch interiors, which were intended to be contemplated quietly in the light of homely fires, bravely keeping a mini Ice-Age at bay.

I had better luck on Friday when both the traditional singers and the equally noisy Gospel choir, who had been serenading the statue of a naked Spartan or possibly Athenian general in the basement of the Ashmolean, were mercifully absent and serenity had been restored.

The plan was to find a painting to look at for a long time and have a go at copying it. As my legs aren’t up to standing for more than a few minutes at a time, seating was essential. Unfortunately the only paintings with seats opposite them were of religious subjects. 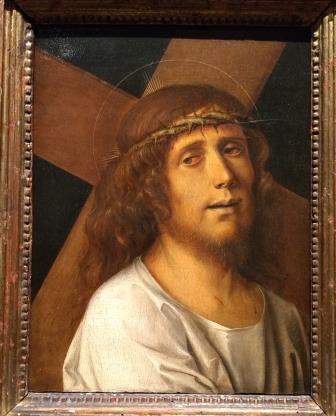 The picture I chose was Christ Carrying the Cross by Bartolomeo Montagna (c.1450-1523). This is in many ways untypical of the genre. there are no insipid Italian skies or angels or halos or general tackiness. Instead it’s a simple, almost monochrome image – the only real hint of colour is the redness in the eyes of a man who hasn’t slept.

Unpacking things a bit, this is a small image which may have been used for personal or family devotions in a private home. So – it’s a thing made to be used and it’s use is not decorative – it’s not an accessory like a favourite poster or cushion – or to display the wealth taste of the owner. Was it an object of devotion of itself – thought of as a “holy” thing or even a “lucky” thing – a household god? Or was it an aid to devotion – a meditation on the Passion – or a symbol of Christ’s presence in the household? I think that the simplicity of the image suggests that it was the latter.

As to the actual image – well, it’s clearly not a portrait in a photographic sense, but it’s not intended to be. It’s not one of the big set pieces and, whilst the it hints at suffering through the presence of the cross and the crown of thorns, it doesn’t lay it on with a trowel – you can’t see the whip wounds, there’s no blood and the nails and spear are yet to come. We know that there’s a crowd, but we don’t see them – it’s a tightly cropped closeup of utter aloneness.

As to my drawing – well, the face is a bit lopsided in that way that you sometimes see in medieval stained glass, but it captures the essence and I’m starting to understand the importance of a strategically placed touch of white.

1 thought on “Imaging the Divine”