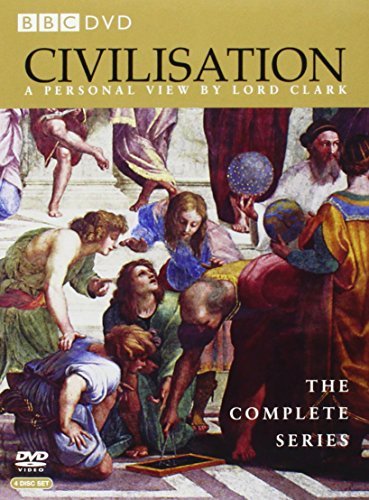 I’ve only seen the first episode of the BBC’s much-heralded Civilizations and, whilst it  was good visually, there was no depth – more a whistle-stop tour (“if it’s Tuesday this must be Petra”) with no underlying narrative. A case of  “never mind the quality, feel the width”.

Kenneth Clarke’s Civilization, which I saw for the first time a few weeks ago, reeks of quality. Yes it’s limited to Western Europe, yes it’s patrician (and male) and and, yes, you do occasionally disagree profoundly and shout at the screen. But it was a personal view and, whilst he name-checked the great civilizations of China and the Indus Valley, Clarke was an expert in Western Art and stuck to what he knew.

Importantly, Clarke was able to distinguish between “culture” and “civilization”, whereas Simon Sharma uses the two terms interchangeably. Having mulled it over, I tend to agree with Clarke that whilst they’re difficult to define, they are two different things. Clarke suggested that civilization was manifested through things like art, music, buildings, literature and laws. It’s possible that it also had something to do with leisure and, in the case of high European culture, patronage and, therefore, wealth.

Another programme this week focussed on the Native Americans of the Pacific North-West. These peoples had developed settled societies and a a rich culture, but did this amount to a civilization in the way that the Mayans of Central America were a civilization? And there’s another problem – the Mayans were quite keen on human sacrifice – something that you might think was pretty barbaric and barbarity is the opposite of civilization. But were the Greeks or the Romans really any better? And what about those great patrons of the arts the Medicis or any number of Renaissance popes or princes? No shortage of barbarism there.

Like Clarke, the presenters of Civilizations are focussing on art. Unlike Clarke, none of these presenters is an art historian, let alone an expert in the art of China, the Ancient Mediterranean, India or the Americas. What a shame that the BBC felt it necessary to substitute celebrity status for expertise. What a shame that they didn’t get a few real experts in their various fields to unpack and interpret different world civilizations to a knowledge-hungry public and, yes, to give a personal view.