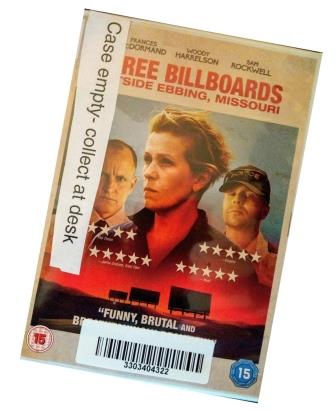 We come to Three Billboards Outside Ebbing Missouri thinking that we know exactly what kind of film it is. We have no idea.

Like I say, we know what this is about. It’s a mother’s cry for justice – for her child; for every young woman who’s been a victim of male violence; for the inevitable next victim, if the killer isn’t caught. We know the story. It’s David and Goliath. We know that the mother will be targeted and victimised; we know that there will be corruption and cover-ups; we hope that it will end in a triumph, but fear tragedy. We know that there’s no way that this could be a frigging comedy.

Mildred Hayes is not a conventional mother-as-victim. There’s nothing intrinsically wrong with this – despite what the papers say, it stands to reason that bad things don’t just happen to good people. Mildred’s not bad exactly, more just “normal for Ebbing”.

Ebbing isn’t just a town with a dysfunctional police department – it’s a dysfunctional town. It’s a town where half the population seems to be permanently intoxicated and extreme casual violence is the order of the day. Counter-intuitively, given the genre, the only sympathetic characters are the two chiefs of police – although, in a neat plot twist, one of the least sympathetic characters (a drunken, incompetent cop who beats up “people of colour” for fun) undergoes a surprising transformation.

If  Three Billboards was a wine, it would be a blend of A Letter to Three Wives and In the Heat of the Night, with a hint of It Should Happen to You, a base note of Hot Fuzz  and a slight aftertaste of Bonnie and Clyde.

Three Billboards is a clever film which takes familiar tropes, messes with your expectations and almost, but not quite, gets away with it. If you haven’t seen it, it’s worth seeing, though you should probably close your eyes during the scene with the dentist.