The last time I visited Nelson’s flagship, we were shown round by a sailor who was a mine of information and had an esoterically nautical approach to the business of giving guided tours – “General purpose bucket: general purposes”.

They don’t have guides any more – there aren’t even any signs to tell you what things are.  The idea is that you should see the ship pretty much as she would have been in 1805 – and they just let you wander round. It’s brilliant – especially on a January weekday, when there are hardly any visitors. 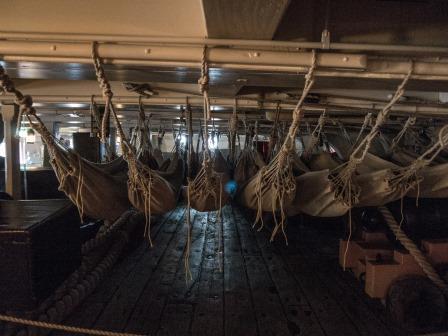 You begin on the quarter deck and gradually work your way through five (or is it six?) levels – from Nelson’s suite of cabins, through the officer’s quarters, down through the gun decks, through the surgeon’s quarters, past the purser’s office and into the stores and the hold (which is literally copper-bottomed) – right down to the ballast. 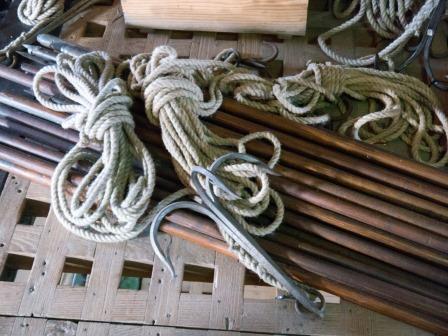 As well as canon, there are boxes of muskets, pikes, cutlasses and grappling irons; tool chests, a furnace for the smithy, a cooking range; hammocks; sea chests; dining tables for the officers; wooden plates for the ratings – everything that you would need for daily living and maintaining a fighting capability. And ropes. And buckets – general purpose and otherwise. 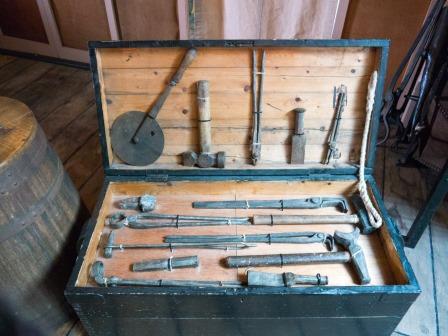 What’s really striking is the size – it seems to go on for ever – and the thought that’s gone into the design.

Many – probably most – of the contents are replicas, so it’s not a museum like the Mary Roses, where you’re constantly reminded that all the artifacts are the real thing, but it does allow you to get a real sense of the ship, how it worked and what life was like for the crew.