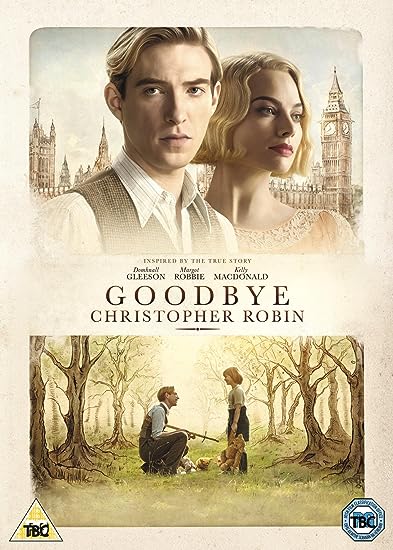 “Dramatisation of the fictional childhood of a real boy whose childhood was famously fictionalised” was my original one-liner about this film, but perhaps it needs a bit of unpacking in response to feedback from After Work’s extensive fan base.

I’ve never read Winnie the Pooh. I know it and can quote it – I know what is meant by being Tiggerish or Eyorish or “being a bear of small brain”  and have played Pooh Sticks with the best of them. I’ve just never read it

I know that housing estates called Hundred Acre Wood are tapping into a false folk memory of a golden age of childhood in an equally golden and equally fictitious version of rural England. This is the same rural idyll invoked by the ubiquitous St Mary Meads, although why this makes advertising sense when you would probably have a higher life expectancy in Prohibition Era Chicago, is anybody’s guess.

Goodbye Christopher Robin  does two things – one is to reinforce the whole golden age/ rural idyll thing – the point about Hundred Acre Wood and Pooh Sticks Bridge is that they area real places; the other is to tell a story of the real Christopher Robin’s childhood in a way that is both fictional and true.

The film tells of a boy who suffered and was damaged by a celebrity status foisted on him by his unthinking and, at times, exploitative parents. The truth is more nuanced – CR Milne’s own account of this time is that  “I also quite liked being Christopher Robin and being famous” and that his “love-hate” relationship with his fictional self began at boarding school.

So this is a reinterpretation of this period of his life – the genesis of Pooh and the impact of the Pooh phenomenon reinterpreted through adult eyes rather than a straight forward narrative account. Does this make it less or more true? I would say “more”,  because what we accept at face value as children may need to be reinterpreted through the filter of adult experience –  a case of  life having to be “understood backwards”.

One of the themes which is not explored is Christopher Robin’s experience as an only child.

The film depicts him as a child alone in an otherwise exclusively adult world – albeit a world where he is loved by his father and his nanny, if not his mother.

It’s also a world in which adults behave like children. His mother is selfish and self-centred, putting her own “needs” before those of her child. And whilst she creates the characters of Pooh and his friends, it is his father, rather than Christopher Robin himself, who brings the imaginative world of the Hundred Acre Wood to life.

We never see into the world of Christopher Robin’s own imagination – he comes across as a largely passive character acting out the part that his playwright father and others have written for him.

We never see him interacting with other children other than as a curiosity to be gawped at, when, in fact, he had a close childhood friendship with a girl of the same age and went to day schools, apparently without the problems that he encountered when he started to board.

This is a good film rather than a great one. It skirts round the issues it tries to raise and relies too much on the lazy trope of “an only child is a lonely child” and concludes with the even lazier trope of a boy becoming a man through the medium of war. In the end, the film makers are unwilling to risk killing the bear that lays the golden egg.

3 thoughts on “Will the real Christopher Robin …?”