Clickety-click in this instance refers not to 1966 (we will get round to 1966, but not just yet) but to 1963’s other big event – my first camera. It was an Instamatic 100; a completely revolutionary piece of design and, this being 1963, unbelievably cool. I got it out of its drawer the other day and, 50 years on, it still looks and feels pretty darned cool.

The feel of a camera is critical. When I was planning to buy a new camera recently, I spent ages researching functionality, comparing features and reading reviews, but the bottom line was visiting the shop and handling the cameras. A camera is a craft tool – it has to feel right in your hands. 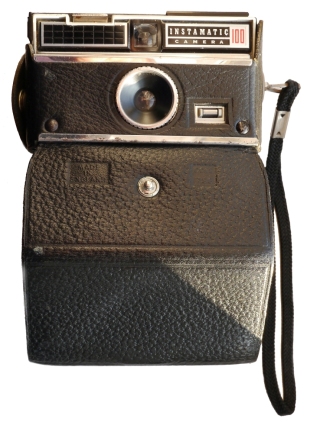 The Instamatic was a monument to simple functionality. The film cartridge did away with the fiddly business of threading paper-backed roll film into a spools – you just slotted it in, closed the back, wound the film forward until the lever-winder stopped and hey-presto – point and shoot. It even had built in flash – even more unbelievably cool. Actually the flash wasn’t entirely cool, because it depended on single-use flash bulbs which had to be removed and disposed of and could be burn your fingers if you weren’t careful.

How I came to be given such a magnificent item (it was my Christmas present that year) is a mystery and belongs, tentatively, in the category of “evidence for miracles”. Eventually, I came to the conclusion that it was all to do with the fact that my mother’s favourite brother was a keen amateur photographer and that I had inadvertently tripped some sort of emotional switch.

Anyway, I got my Instamatic and started on the serious pursuit of photography. I probably only got through one or two films a year (at the very beginning, these would be 12-exposure black and white prints, although I subsequently migrated to colour slides). Ironically, the shutter mechanism was very quiet – much quieter, in fact, than the completely unnecessary electronic shutter audio effect on my new digital camera. More is not necessarily better.