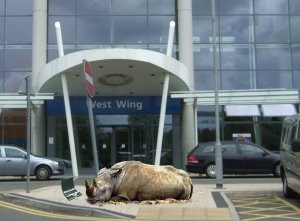 “We welcome your comments”

Yesterday – at last – I got an appointment letter from the Orthoptics Clinic at Oxford Eye Hospital . It’s taken just over a month to sort out the appointment and I now have to wait another month before being seen (on the 17th December).

Although I’m back on track, I’ve still taken the decision to lodge a formal complaint. IMHO the measure of an organisation is not that things never go wrong, but how good the organisation is at sorting things out. The Eye Hospital has been phenomenally inept and, even amongst my small circle of friends, mine is not an isolated experience.

Unfortunately, the best way to bring about change is for people to make formal complaints which trigger an investigation and, more importantly, become a matter of public record. I don’t want a clinical dissection of what went wrong with my appointment – I want somebody to look at the system and fix it so that other people don’t have the same problem.

This is a formal complaint about the difficulties I have had in obtaining an appointment at the Orthoptics Clinic at the Eye Hospital, following a referral by Mr Salmon.

The history of dealings with the Hospital between the 5th October 2012 and 5th November 2012 is summarised in my previous emails (below).

On 7th November 2012, I tried to contact the Eye Hospital several times by phone, but either received a message asking me to leave a message which they would “endeavour” to deal with within 24 hrs (by this time, I didn’t have 24 hours) or was cut off. I eventually managed to contact Mr Salmon’s PA who checked my details, promised to sort out the correct appointment and gave me a follow up call the following morning. I have now received a letter confirming an appointment on 17th December.

The substance of my complaint is:

Your appointment system seems to be inherently inefficient – the problems I encountered could easily have been avoided if routine appointments were made at the time, rather than depending on bits of paper which are put on one side to be dealt with later.

Once I raised a concern, the staff I spoke to didn’t appear to have access to the information necessary to make an appointment.

With the exception of one email, no-one got back to me to tell me what progress had been made: this is basic customer service procedure. When I followed up my enquiry, there didn’t seem to be any record of my previous contacts or of what action had been taken up to that point and, until I contacted the PA, nobody took ownership of the problem.

I was eventually given a duplicate appointment with Mr Salmon’s glaucoma clinic, although it was clear from my phone calls and emails that this was not what was required –  it is also clear, from my dealings with the PA, that the hospital record contained the correct information.

The level of customer service that I have received from your organisation is completely unacceptable and I am particularly concerned that patients with less tenacity or experience in dealing with complex bureaucracies may be suffering (I use the word advisedly) because of these types of inefficiencies.

An exception to this is Mr Salmon’s PA, who dealt with my concerns promptly and efficiently – perhaps you would pass on my thanks.